Mistress BlackDiamoond loves her shoes. She went to her closet and found one of her most expensive pair missing and she was mad. She called her slave and made him tell her where he had taken it. He tried to deny but she gave him a blinding slap and he took her to where he had hidden it. For trying to steal her shoes, she slapped him brutally before chasing him away. 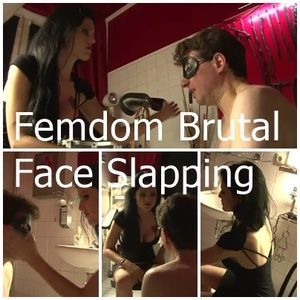